A Trilogy of Success

Recently, a good friend made an offer that I had to accept. He is a persuasive fellow–a psychologist, in fact. He also is the author of several books in his field, and knows the publishing business.

And what was his offer? He and his wife would be happy to open their beautiful home to people from our small church in order to celebrate the release of my new book, Nicaea Trilogy.

What a great idea!

Our pastor also thought so. He talked briefly about my book during Sunday worship, holding up a copy and remarking that Christians have an ancient yet modern faith. He then invited everyone to visit my author’s table after the service to learn more about the trilogy.
With interest in the book cultivated, my friend then sent out a series of personal invitations to folks who might attend the book launch party, which would be held for a couple hours on a Sunday afternoon.

The response was gratifying–nearly 40 people filled the living and dining rooms, and kitchen. It was a full house, and a lively gathering. They munched on tasty appetizers, listened to brief readings from my book and asked many questions, and then were invited to purchase signed copies at a discount.

I self-published my first novel, Faithful Journey, through WinePress (and later republished by Redemption Press). I love history, especially the early church, and the novel is a retelling of Luke’s remarkable account in Acts. I was pleased with my first attempt as a novelist. A number of people even said they liked it. I wondered if there was a sequel just waiting to be written . . . and there was!

The Nicaea Trilogy is another work of historical fiction. It’s a set of three novellas under one cover, telling the story of an ancient Christian codex that is the object of a relentless quest by people determined to possess it. It’s told against a backdrop of life-changing events in the days of the Roman Empire. What finally happens to the codex is revealed, many centuries later, in an epilogue filled with surprises. 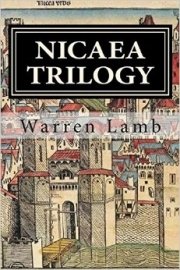 I self-published the trilogy in June 2015, but, despite some early good reviews and favorable reader comments, sales of the book were disappointing. So I finally decided to ask Redemption Press for help in taking over the project and republishing it, with the primary goal of improving both online and bookstore marketing and distribution. Valerie McKay and Amber Payne took ownership of the project and have been a pleasure to work with. The book’s front and back covers are enhanced also, giving it a professional appearance. The Nicaea Trilogy is scheduled to re-released in January 2016. Perhaps I should have another party to celebrate!