It’s great to get a professional perspective on this part of your book because it is one of the most important.

Often times, authors send me titles that are either too long, descriptive and complicated or, on the other end of the spectrum, too vague and unclear.

If someone has to wonder what the meaning of your title is, they’ll just move on.

Here are two examples of books that I’ve had the honor to revise and revamp. 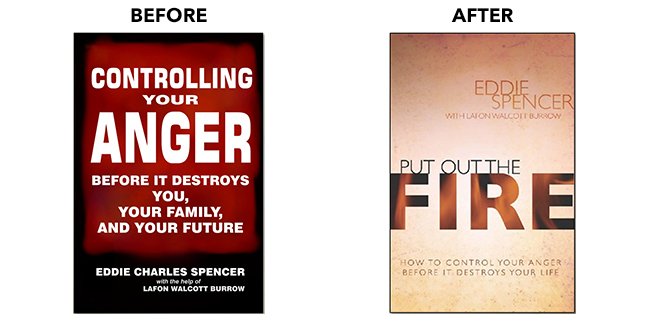 The book by Eddie Spencer was formerly titled Controlling Your Anger Before it Destroys You, Your Family, and Your Future.

When he brought me all the files, he’d already had the cover designed. As I looked it over, the cover just made me angry! On top of that, the title was way too wordy and sounded much more like a subtitle. Not only that, the cover design looked like it was self-published. One thing we avoid like the plague.

Because this was Eddie’s second book with us, we were able to educate and convince him to allow us to revise the title and cover.

Put Out the Fire: How to Control Your Anger Before it Destroys Your Life is a title that sings. You don’t get tongue tied when you read it and it has a nice cadence.  Putting the new title and cover together in comparison to the old version was like night and day. Just redesigning the cover wouldn’t have been enough. The title needed to be revised as well.

The other example that comes to mind is a book by Brenda Robinson, formerly titled Search and Seizure: My Life Story. 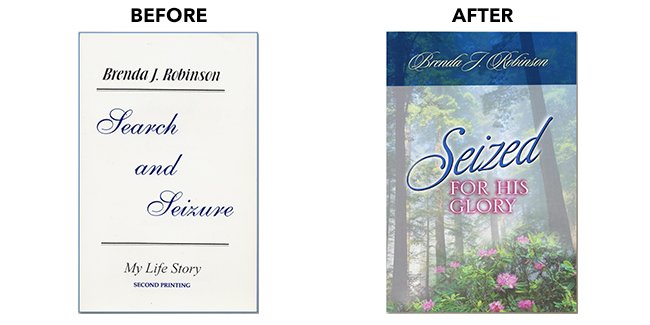 Reading “search and seizure” sounded to me like a drug bust. In reality, the author had epilepsy and God healed her, so a new title was definitely recommended.

As our creative team met and brainstormed, we came up with Seized for His Glory. Again, a title that sings and clearly communicates the contents of the book, not the mention a much more beautiful cover.

If you’re like these authors who had already published their book without having the professional help that was needed, don’t be dismayed.

“We need to be willing to be teachable and to take honest criticism so that our work becomes” the best that it can be for God. – Athena Dean Holtz, You Can Do It: A Guide to Christian Self-Publishing

If you have already published your book without the opportunity to consult with a professional, consider working with us on a strategy to relaunch your book.