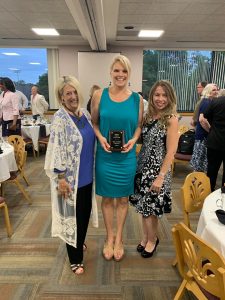 The judge remarked: “Amy invites her readers to an inside look at the modeling industry and God’s calling in that arena. Her deep faith drew her into an unlikely career that became her calling. With her friendly and anecdotal writing style, Amy’s book reads easily and engagingly, and reminds us all that our careers–whatever they might be–can also be our callings.”

In June 2018, her first year at Write-to-Publish, Amy Joob met Redemption senior editor, Inger Logelin, and discussed her hopes for publishing. The two discovered connections through friends and family in Esko, Minn., where Joob was raised, which cemented their bond. 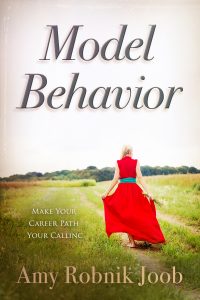 Model Behavior was released in January of 2019, and Joob returned for her second year at the conference with her book in hand, and many book signings and appearances already under her belt. On hand at the award ceremony were Redemption publisher Athena Dean Holtz and Dori De Vries Harrell, managing editor.

Model, athlete, and motivational speaker Amy Joob shares her story of uncompromising faith in a world of entertainment and wealth. As an established model in Chicago, Amy Joob has traveled around the United States and Canada as a team captain for Porsche Cars North America and as a fitness model and product specialist for MET-Rx. She has also worked in print, runway, bridal, informal modeling, and trade shows.

As she pursued a modeling career, Amy was warned not to go into modeling or acting as it might potentially ruin her life, marriage, and Christian testimony. Joob says, “They didn’t understand my underlying purpose in entering the industry was to be Christ’s ambassador.” She became a pioneer, and experienced success in the modeling world.

Model Behavior is Amy’s testament of faith that where God leads, He goes before. The Chicago-area resident says, “If God is calling you to an unconventional career, trust Him to lead you through every challenge, every difficulty, and every triumph.” Model Behavior will encourage and mentor young people who feel called to pursue unconventional careers, to think outside the box, and to follow the unique career path God may have for their lives.

Learn more about Amy at www.amyjoob.com