Another Full Circle for Redemption Press

Many of you know that my journey in the Christian publishing space began in the late 80’s when I was part of Point Man Ministries and the Nam Vet: Making Peace with Your Past book was published.

So much has happened since then. … victories and failures, gains and losses, deception and detours followed by repentance and redemption. I love it when the Lord orchestrates these times of clear evidence of His hand at work in my personal life and Redemption Press.

Early this year, one of my long-time Vietnam veteran friends from Point Man days suggested I meet Aaron and Holly Quinonez.

“They have such a powerful ministry to veterans … I think the Lord might have some publishing in mind for them!”

There were quite a few delays before we finally met, but in early May Aaron, with his wife and ministry partner, Holly, came to the office to meet me and see if we were a fit.

Mind you, they had no idea that I helped expand a movement that became what is now known as Point Man International Ministries back in 1986.

It was before the concept of small groups was a “thing” and Vietnam veterans leading Point Man groups in churches were sprouting up across the nation. Groups for both Vietnam vets and Homefront groups for their wives.

I witnessed incredible ministry over the next number of years. Rough, tough, burley biker vets came to know Jesus and were forever changed, one vet who’d lived in a wheelchair for over 20 years forgave Jane Fonda and received healing in an instant, able to walk again. So many incredible testimonies to the reality of God and His faithfulness … it was an amazing time in my life that cemented in my heart the goodness of God.

So, of course, the idea of possibly publishing a new book by the founders of Q Missions, where veterans are taught the reality of healing 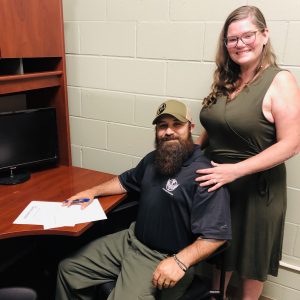 through service, totally blew me away! Aaron Quinonez has been named Hometown Hero and has such an impact on the veterans he works with. I just cannot express the gratitude I feel for being allowed to partner with Aaron and Holly to publish Healing Thru Service, due to release November 11, 2019.

After  I became a follower of Christ in March of 1986 at age 33, it was about this time of year when Point Man was birthed and ministry began … 33 years ago. WOW. This is a full circle like none other. He is ALWAYS faithful!