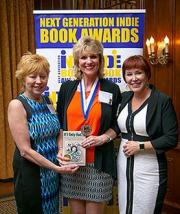 Redemption Press is pleased to announce one of its published books, If I Only Had…Wrapping Yourself in God’s Truth During Storms of Insecurity, co-authored by Lisa Burkhardt Worley and Catherine Weiskopf, was named a finalist in the “Religious Non-fiction” category of the prestigious Next Generation Indie Book Awards. Worley and Weiskopf accepted the award at the Harvard Club in New York City. “It was a great honor to be recognized for our efforts,” said Burkhardt Worley. Catherine Weiskopf agreed and added, “It is further confirmation that If I Only Had…is a great work that is filled with God inspired help for those who struggle with insecurity.”

If I Only Had…, is a book for women who’ve searched for security in looks, friends, family, money, and men, and have come up empty-handed. This four-time award-winning book is an answer-focused guide for women who have believed lies about themselves for too long and are ready to replace those lies with God’s truth. Loaded with personal stories, “scarves of truth,” and Biblical characters who have struggled with the same insecurity issues, If I Only Had… is the perfect book for anyone who is ready to have victory over insecurity.

Burkhardt Worley, a former national television sports reporter, is an author of three books, including the Pearls of Promise devotional, and most recently The Most Powerful P, A Child’s Introduction to the Power of Prayer. She is also a speaker and founder of Pearls of Promise Ministries, a ministry with a goal of helping women overcome dysfunction and trials in their lives through the strength and love of Christ. Lisa has a personal story of victory as she grew up in a fatherless home with a mentally ill mother. Lisa earned a Masters of Theological Studies degree from Perkins School of Theology in 2008, graduating Magna Cum Laude.

Catherine Weiskopf is the Creative Director of Pearls of Promise Ministries and is the freelance author of five books including the Pearls of Promise devotional. She has also written numerous scripture based plays that have entertained thousands of children and been published in magazines such as Brio, Highlights, and Current Health2.