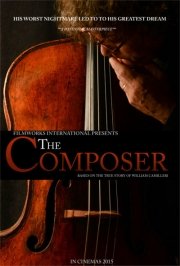 After 25 years as a professional writer, one of Redemption Press’ authors, Kathryn Dahlstrom, got the break she had been waiting for – she landed a job as a screenplay writer for an upcoming Hollywood film called The Composer.

The Composer is based on the true story of William Camilleri. Even as a child, William, like Mozart, has a supernatural talent for music. His father, a professor of music and also a composer, finds his son’s gift so threatening he forbids him to play the piano in their home, denies him training, and abuses and belittles him.

Not content at passing off William’s compositions as his own, his father also sets out to destroy him. He turns to influential doctors—friends of his—who prescribe hallucinogenic drugs to William as a form of mind control.

William enters adulthood a drug addict, fighting to keep his sense of reality. Even so, his talent is powerful enough to earn him success in the music industry. His father, though, sabotages his gains wherever he can, forcing him in and out of mental hospitals and drug rehab centers, pushing William downward until his very life is at stake.

Through the turmoil and pain of years, William turns time and again to the thing that can save him—his music.

William’s story is getting such buzz in Hollywood that heavyweights like music guru Bob Parsons who worked with the Beatles and cinematographer Garry Waller, who works with Steven Spielberg and George Lucas, contacted William himself and attached themselves to the project.

William and his team needed a viable screenplay, so they contacted Kathryn’s friend, Mark Cramer, a faith-based film producer and screenwriter. Mark replied to William and his team with this: “I’m up to my neck producing two films right now. So I recommend Kathryn Dahlstrom.” (!!)

Kathryn landed this job because she has spent the past couple of years–among other things–adapting a family fantasy screenplay of Mark Cramer’s into a kid’s fantasy novel called The Land of Beyond Belief.

Kathryn never imagined what the Lord would do through her working with Mark. She referenced Ephesians 3: 20-21 saying Jesus had been making this clear to her heart, especially when she had been discouraged over the sad sales of her book, Children of Angel’s. She knew a break-through was coming. She was to wait for it and keep working at writing and marketing.

Now Kathryn is writing the screenplay, averaging 5 new pages a day. Mark is now attached to the project as a producer.

The Composer will not be aimed strictly to the faith-based realm. William suffered tough things as a young man and made some bad choices. He freely admits that, and wants the world to understand God’s grace and hope. It’s touted as “A Beautiful Mind” meets “Goodwill Hunting” meets “Forrest Gump.”